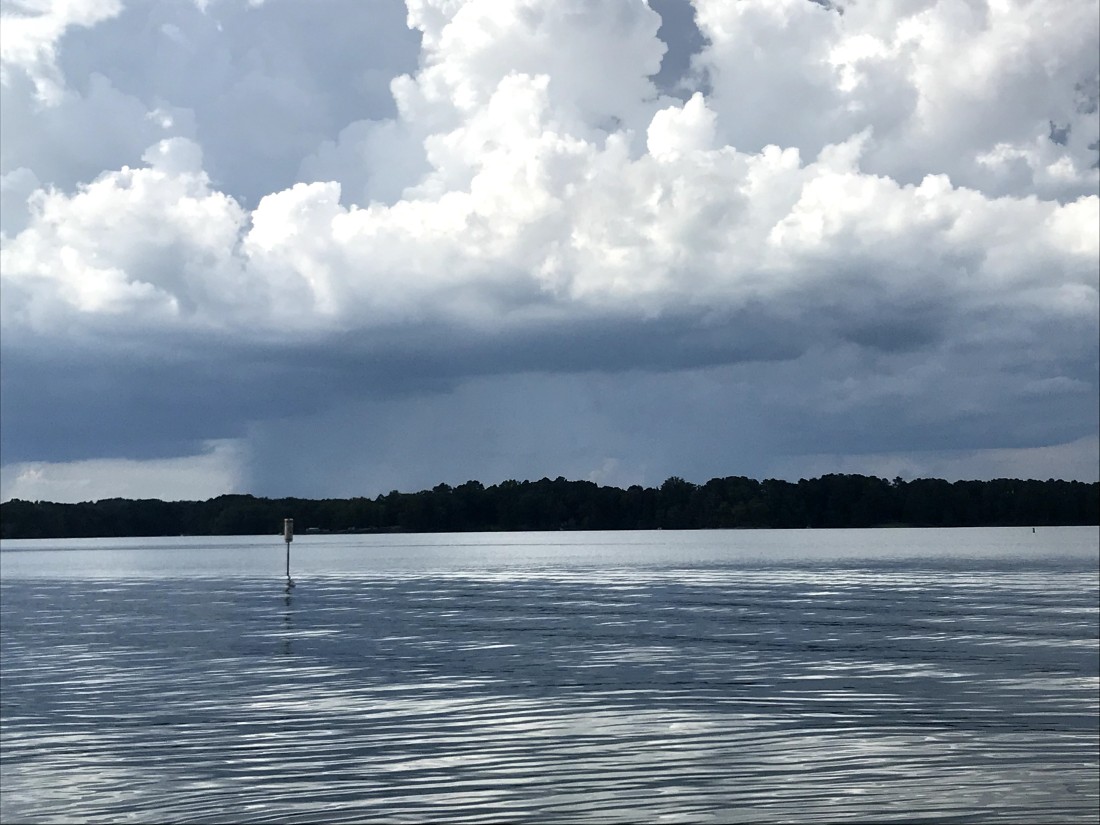 I’m sitting on the dock at the lake watching my children swim and listening for thunder in the clouds I can see rolling our direction. It’s surprisingly hard to tell the difference between the low rumble of distant thunder and the thud of the dog running across the dock, the grind and clang of metal ladder as it thumps against the wood while the kids clamber up, or even the occasional dive-muffled yell as they tumble back in. Listening requires attention, an immersion in the moment.

Evenings here, storms roll in from the northeast. We can see them coming from miles away and they don’t always reach us, so we linger in the lake for as long as possible. Sometimes a gray haze of rain connects the distant clouds to the green forest roof. Sometimes there’s thunder. Every now and then there’s lightning, which means everyone out of the lake, even if the storm is visibly far away. Tonight, we are hoping for no lightning, no thunder. We’re hoping to wallow in the warm water, play on the sandbar, maybe even get in one more boat ride.

Ah, the neighbor is out for her evening swim with her three dogs. She strokes out to the sandbar buoy and back. Her dogs swim over to play with the kids as my parents’ dog – not a water dog – whines, paces and barks from near my feet. In the near distance a speed boat slowly pulls a new wake-boarder who struggles for balance; the humid air carries the sound of their motor and music trails in their wake. Is that thunder? No, I don’t think so.

We leave here the day after tomorrow after nearly 6 weeks of vacation. I am ready to go home, but I’m not quite tired of this yet. My school year doesn’t start for another 3 1/2 weeks, but I feel as though summer is coming to an end. Online, I’m surrounded by talk of back to school – teachers are setting up classrooms, attending PD, planning lessons. Here in South Carolina, back to school sales abound.  I tell myself that I have plenty of time –  so much of summer remains! – and still, I feel the tug of September, I sense the ending.

The great blue heron flies by and this evening she does not stop to perch on the sandbar buoy; she skims the surface of the water on her way to wherever it is she rests. The boat passes again, no wakeboarder now, heading home. And…I think I hear thunder.

Early August brings a barely perceptible increase in pressure, an almost gentle sense of melancholy: I have things I want to do, things I wanted to get done. Time is running short, or at least shorter. September is there, looming. It’s like I’m sitting on the dock at the lake, watching my children swim and listening for thunder in the clouds I can see rolling my direction.

Follow Persistence and Pedagogy on WordPress.com
Join 1,395 other followers

for teachers by teachers