The bread was burning. The smell was unmistakable, so I grabbed the turner and flipped the sandwich over to see if it was salvageable. It was not. Nor was its compatriot, blackening merrily next to it in the pan. I flipped them anyway and, as I ruefully considered whether I could scrape off enough burn to make them kid-edible, I burned the other side. Thoroughly. 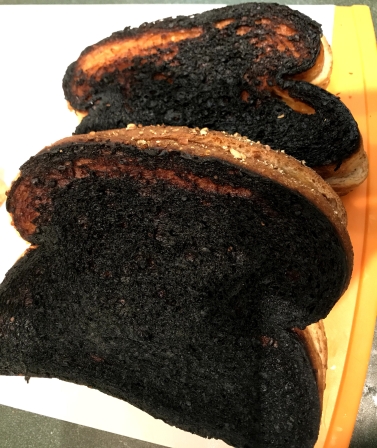 I took a deep breath, closed my eyes briefly, realized this is as close as I get to meditation most days, and started over. Butter the first slice of bread; slice the cheese; arrange the orange strips on the bread; place the second slice of bread on top; butter again; into the pan. Repeat.

How many hundreds of times have I made grilled cheese sandwiches? How many times have I made *these* grilled cheese sandwiches? Same bread, same cheese, same pan, same stove. How on earth did I manage to made such a mess of something so simple? I watched the second batch like a newly-minted chef. They did not burn. My house was brimming with 7- and 8-year-olds making the most of another glorious summer day, so I started another batch. Nothing burned.

As the boys charged in and scarfed down the sandwiches, I tried to get rid of the lingering acrid smell. I opened the door and turned on the range fan. Still the question remained, like an accusation, “How many times have I done this? How could I burn them?” And then, suddenly, I started to chuckle. Yup, how many times? How many hundreds of times have I made these? How many more will I make? Most will turn out, and some will undoubtedly burn.

Ah, but the universe communicates in funny ways, and here – thanks to some sandwiches – was my end-of-summer lesson. Sometimes, the sandwiches burn for no reason at all. Sometimes, I can do everything right and it still won’t work. Sometimes, I just need to throw it away and start over without judgment or blame or worry.

This is exactly what I needed to remember as I head into the new school year: Sometimes, the sandwiches burn; I can always make more.