My 10-year-old just wandered downstairs to get a book. Specifically, he came for Calvin and Hobbes. I can always tell when he’s reading Calvin and Hobbes because his giggles infuse the house; it’s not necessarily ideal bedtime reading.

I have no doubt that he wanted the book, but I think he also wanted to know what I was up to because I had refused to read one more chapter tonight even though the title of the next chapter is “The Basilisk” and even though we are pretty sure the dragon has unwittingly settled down for sleep in the basilisk’s cave. (Dragon Rider, Cornelia Funke, in case you’re wondering.) Normally I’m a pushover for “one more chapter,” so he really needed to know what had called me away. What could be more important than reading?

“You’re writing,” he observed nonchalantly, reading over my shoulder. “What do you write about?” I explained the idea of a slice of life and confessed that I was stuck tonight. He had a few suggestions for topics, including favourite books. His faves include the Spy School series and, he thinks, probably the Dog Man series because “even though they’re easy to read they are really funny.” But his favourite of all is The Girl Who Drank the Moon by Kelly Barnhill. It took us a while to read that one aloud, but both of my children were rapt throughout. As he recalled the story, he remarked that he also really loves Witch’s Boy and Iron-Hearted Violet, also by Barnhill. In fact, I think Kelly Barnhill is the first author he has fallen for. He likes his series, but he loves Barnhill for her style and storytelling.

On a whim, we looked up her website – perfect activity for a parent procrastinating writing and a kid avoiding bed. Her tagline reads, “Author, teacher, mom. Newbery medalist. Terrible gardener. Maker of pie.”

“Mom!” he practically shouted, “you’re a teacher and a mom, too. Maybe you could write a book.” He paused, then mused under his breath, “And she makes pies. That’s really good. Grandma makes pies. That’s good.” He leaned in towards my computer and we began to peruse Barnhill’s site.

“She’s writing MORE books! I hope they come soon. I wonder what they’ll be about. I like the titles.” He was so wiggly with excitement that he did a kind of tap dance around the kitchen table. (He will be unhappy if he reads this. He will say he did NOT dance. Twirled around my chair? Moved his whole body with excitement in a little circle?)  He stopped,  suddenly serious. “Is she a New York Times bestseller? She must be a New York Times bestseller. Can you look?” I asked him why this mattered. “Because that means that so many people like her books. They know about her.” His eyes were starry with the idea that others might have experienced the magic that he knows.

I was about to suggest that we could write to her when I realized that his head might explode at the mere thought. And it was past his bedtime. So tonight I will hold the brimming potential of his excitement in my heart; tomorrow, together, we will write.

Ah, Kelly Barnhill, and all the writers out there, thrilling the hearts of readers, thanks for the magic.

That said, I can’t quite shake the idea, and I keep writing them. So, without too many more words, in no particular order, here are six of my six-word stories:

His tiny naked body snuggles mine.

Found my love at their wedding.

I constantly wonder what students learn.

I forsook politeness to pursue learning.

One more page, then I’ll sleep.

I am trying to teach poetry to twelve Grade 10 students who, for the most part, are not especially interested. They are very clear about their lack of interest. This year, as I did last year, I am trying to convince them that poetry is about playing with language, and that playing with language is worthwhile because it’s fun and it helps you say things the way you want to say them.

In case you are wondering, they are not interested.

This semester we are struggling. I have done all the things – the interesting intro, the playful, the different, the cool. 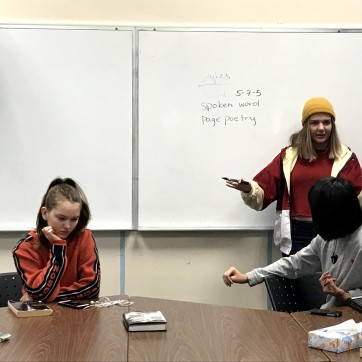 But in case you are wondering, my class is not especially interested.

Now that I’m really sitting down to think about it, the unit is sort of working, but I’m not gonna lie, it’s sort of not. In fact, this year I have been tempted to give up. Day after day, I come in enthusiastic and prepared. Day after day, one girl reads a book under the table, one boy pulls out his phone and two girls whisper giggle at every transition. Four of twelve is a lot of visibly uninterested kids. Others are angling to convince me that compliance = engagement. I’m not buying what they’re selling, but that’s only fair because they’re not buying what I’m selling either.

As I write, I’m realizing that I’ve been assuming that their behaviour is designed to tell me that – in case I didn’t know – they are *not* interested, but they may actually be even more nervous than students in previous years. This lack of interest may be a disguise for some serious fear. After all, I am asking a lot of them, and the most visibly uninterested are also kids who stand to lose a lot by engaging. One thinks of herself as a writer, but she’s very unwilling to edit or consider any direction for her freewriting. (She also has a habit of abandoning books 3/4 of the way through.) One has told me that he will “probably” be interested in reading when he gets older because that’s what happened to his mom; writing doesn’t figure into his self-image. Two are reading and writing at a level significantly lower than Grade 10. (But they are reading! Hooray!) And I’ve got three exchange students who speak very little English. (But they are trying and they are learning. Hooray!) And some non-attenders (who mostly make it to English right now. Hooray!)

I wonder if when I say “play” they hear “I’m actually going to give you grades for all of this and I’m just pretending this is fun”? Wouldn’t be the first time. But they’ve met their match: I will not give up. Honestly, I pretty much never give up. I’ve got more persistence than is realistic by any stretch of the imagination.

And I want to think about today when we took Gwendolyn Brooks’ “We Real Cool” and Gertrude Stein’s “Susie Asado” as our mentor texts. The students were pretty interested in “We Real Cool”. They liked the enjambment, the alliteration, the assonance. (They especially like the word “ASSonance.” They always do.) They were able to talk about the way the sounds were “awesome” and “on purpose.” I think they felt competent in their understanding.

“Susie Asado” was a different story. They pretty much sat, dumbfounded, in front of it. I said, “What do you notice about this poem?” and no one spoke. SIGH. I waited. Finally, one of them risked the truth: “This poem doesn’t make any sense.” No kidding. We talked about the sounds of words. We tried to imagine what on earth Gertrude Stein was doing and why anyone thought this was worth publishing. I made my naysayers put away books and phones. We listened. We talked about onomatopoeia. We watched flamenco dancing (because Gertrude Stein said that “Susie Asado” was an attempt to render the sounds of flamenco, particularly of one flamenco dancer. If you believe Gertrude Stein.) We talked about what things we know that have distinct but changing sounds – my mom driving behind a bad driver, a beach, a storm. And then we tried to write our own sound poem.

Ok, that’s a lie. Then I told the students to try to write a sound poem, and 9 out of 11 (because one was absent) stared at a blank page for five minutes. My ask was really really hard. So I suggested that maybe I should write in front of them and they could help me out. That was the ticket. And this is as far as we got. We are trying to record the sound of the hallway just before the bell rings and then as it fills with students…

Join us! Write your own Slice of Life and post it on Tuesdays at https://twowritingteachers.org