I had some ideas for today’s slice, then I drove the swim team carpool. Nothing like a bunch of 9-year-olds to throw off your plans.

Tonight as we left swim practice, one of the little girls kissed the other on the nose. They giggled. Then she came towards my son, the only boy in the group of three.

He said, “Don’t you dare kiss me” but she was on her way over before he even started to talk. She kissed his cheek. He wiped it off. “GROSS.”

She giggled. She kissed his arm. He wiped it off. “GROSS.”

The three of them tumbled through the hallways of the sportsplex, chasing and catching, twisting and turning, giggling and gasping.

She caught him and said, “Your choice: I can kiss you or I can lick you.”
He furrowed his brow, “Gross. I think I’d rather if you bit me.”

I tried not to laugh.

She kissed his shoulder. He twisted away but didn’t go far.

I wanted to be reasonable, to be appropriate, to talk of consent or, well, something. I said, “You know that it’s not ok to kiss someone who doesn’t want to be kissed.” Three sets of eyes looked at me pityingly. “WE KNOW.”

We got in the car. He sat in the middle. They whispered and giggled. As the door opened for her to get out, she kissed his cheek. “I’d rather you bit me!” he yelled after her. 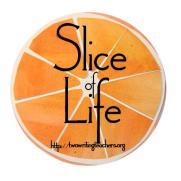 Thanks to Two Writing Teachers for this wonderful month of inspiration.

9 thoughts on “The first kisses”