It’s late and the long weekend has begun. My mother and my aunt have arrived. The kids are asleep, my mother too. Me? I’m exhausted  – sleep has eluded me several nights this week – but up late trying to write my slice for tomorrow. I am overwhelmed at the thought of this month ending, overwhelmed by the supportive community here, overwhelmed by what I’ve learned and what I’ve experienced. I have changed, and I had planned to write about it. But I’m sitting in at the kitchen listening to my husband and my aunt, deep in animated conversation. Honestly… how can I write or reflect when they are talking history?

For my husband and my aunt, history is alive and fully present. They are teary while talking about Uncle Pete (my great uncle) finding a baby during WW2 and carrying it with him through France until he found a family to care for it weeks. My aunt has a picture of the baby on her phone, but no one knows what happened after Pete gave the baby back. As Pete was dying, he wondered about that baby. 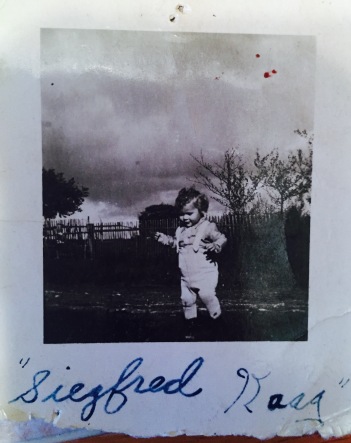 And now my aunt is telling another story… and there are more tears – for a soldier who died at 19, for his buddy who lived and married his friend’s widow, for his revelation 50 years later that he had been living his buddy’s life for him and, after all that, he was afraid if his wife died first she would meet his buddy in Heaven and he would lose her forever. He died minutes before she did. These men, their stories, they are real and important right now in this kitchen.

And now they are laughing through the tears – for Uncle Pete who probably would have been diagnosed with PTSD and swore to God on a battlefield that if he ever got home he would never leave Rte 27 again. How he RSVP’d for a wedding by writing on the back of the invitation “Sorry, can’t leave Rte 27 yet.” How he really thought that Eleanor Roosevelt and Churchill were having an affair. And about the seemingly endless keg of beer in his basement…

And now they are on to Band of Brothers. And Saving Private Ryan. And Frederick Forsyth’s “The Shepherd.” Movies and stories and books that have embodied the stories that move them to tears. Their passion, the way they build on one another, their fully focused presence in this kitchen, far from any battle – it’s absorbing.

And here I sit, listening, writing, and marveling at their passion, at how stories bring these men into our kitchen, at how important the stories are. Tomorrow, I’ll mourn the end of this Slice of Life Challenge. Tonight, I’m listening to two of my favourite people discuss their passion like it is alive. What could be better?

Thanks to Two Writing Teachers for this wonderful month of inspiration.

Follow Persistence and Pedagogy on WordPress.com
Join 1,336 other followers