Nine months was a long time to be out of our house for renovations, but at least the humans in our household understood that our tiny apartment was only a temporary space. Tippy and Hera, our cats, were less fortunate. They clearly thought our move to the apartment was a significant turn for the worse in their lives. They were particularly grumpy about the change from being indoor/outdoor cats to being indoor cats.

Tippy – who, after we got her, spent long hours lying in wait, hidden, so that she could escape every time the smaller humans opened the door to leave – is the reason that they are allowed outside. The apartment was practically an affront to her existence, and she was, frankly, dissatisfied with the only alternative to the great outdoors that we had to offer her: a tiny back porch.

When we moved back in, our house was so dramatically altered that we didn’t know if they would recognize the place. We didn’t want to risk them getting lost, so we kept them inside for a few days. Hera was pretty relaxed about the whole situation, but Tippy was not impressed.

So yesterday, we relented. Tippy kept begging at the front door, so we let them out. Look at their cautious excitement. 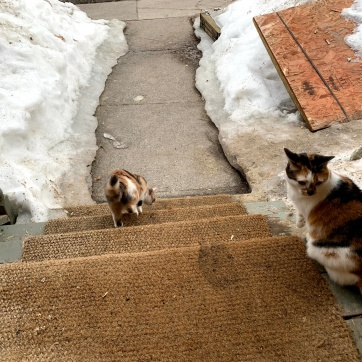 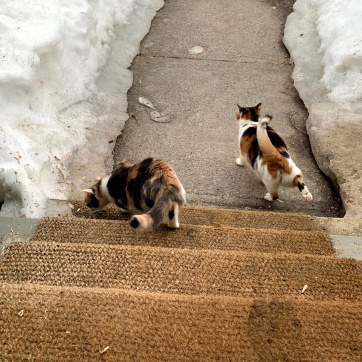 This morning, as I sat in our new kitchen, enjoying the sunshine, I noticed that neither of the girls was begging to be let out the back door, even though they were right next to it. Then I realized that they had never seen a sliding glass door before. I promptly stood up, walked over, and opened the door. I thought their heads were going to explode. Tippy who is, honestly, way way smarter than Hera, kept looking at the door and then looking at me as if to say, “Um… you just opened a WALL.” Hera actually stuck her paw through the opening and then pulled it back in several times, like some character in a Disney film who’s testing a magical portal. Eventually, they both went outside. Hera freaked herself out and came right back in – what if that magic portal turns back into a wall?! Tippy looked back as if to say, “See ya!” and disappeared into the neighbors’ yard, probably to let the neighborhood know that she’s home and will be requiring her previous rations of adoration and food.

And I returned to my sunny spot in the kitchen, chuckling and glad to be home.

Not the Whole Story

Just a girl and her Guatemalan street pup, living in Cali