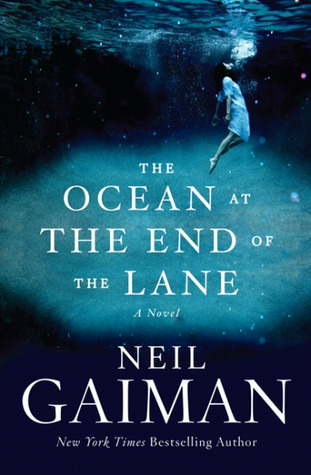 I was reading Neil Gaiman’s The Ocean at the End of the Lane. It isn’t a properly scary book – not like scary movies, anyway – though I suppose I wouldn’t know since I don’t watch scary movies – but it is vaguely terrifying. It’s about being a child and, well, let’s call it “menacing”: no jump scares; lots of tense terror. Whatever it was, I could not put it down because I was too afraid to stop reading.

Sometime after midnight, I gave myself a stern talking to – I was a grown woman with children for heaven’s sake. I gave myself a little leeway since my husband was away on a trip, leaving me alone in our bed, but my visiting in-laws were asleep in the guest room right next to my room. They would expect me to wake up tomorrow at a normal hour, and I needed to get some sleep.

I turned another page. And another. I could not look away from the darkness that wormed its way out of the book and into my mind. Eventually, my eyes drooped closed. I had just enough consciousness left to reach up and turn off the reading light.

As my mind slipped fretfully towards slumber, the pocket door that led into our bedroom scraped open. My eyes flew open and the rest of my body shut down: I could no more move than scream. A tall, pale figure came slowly into view, almost stumbled – just there! – hovered for a moment, then turned and glided away, scraping the door closed as it left.

My lips had gone numb; so had my fingertips. I remained paralyzed in the bed, listening for some indication that what I had just seen was real, afraid that what I’d just seen was real. After seconds, minutes, hours had passed, I raised a trembling hand to the chain above my head and pulled. The light came on, though it now seemed nearly powerless against the dark. My hand groped towards the bedside table. I found the book and opened it again.

I read all the way to the end. I cannot remember when I was finally able to sleep, when the characters were as safe as they were going to be, when pure exhaustion overtook my fear.

I stumbled down to the kitchen the next morning. Everyone was chipper, everything was bright: Grandpa Jim’s beard practically glowed white; Grandma Shirley hummed and sang while she made breakfast. Hollow-eyed, I watched, wondering if I should say anything about last night’s visitation. Would they believe me? Had I imagined it?

As we settled in to eat, Grandpa Jim started to talk, “A funny thing happened to me last night.” My head snapped up; my sense were wildly alert. Had he seen it, too? “I got up to go to the bathroom, got turned around and walked right into your bedroom before I realized it. I’m just glad I didn’t wake you up.” He returned to his granola and I stared at him for a full minute before I burst into hysterical laughter.

Not a ghost; just a grandpa.

I’ve never forgotten the book. You could do worse than to read The Ocean at the End of Lane as Halloween approaches – or anytime, really.