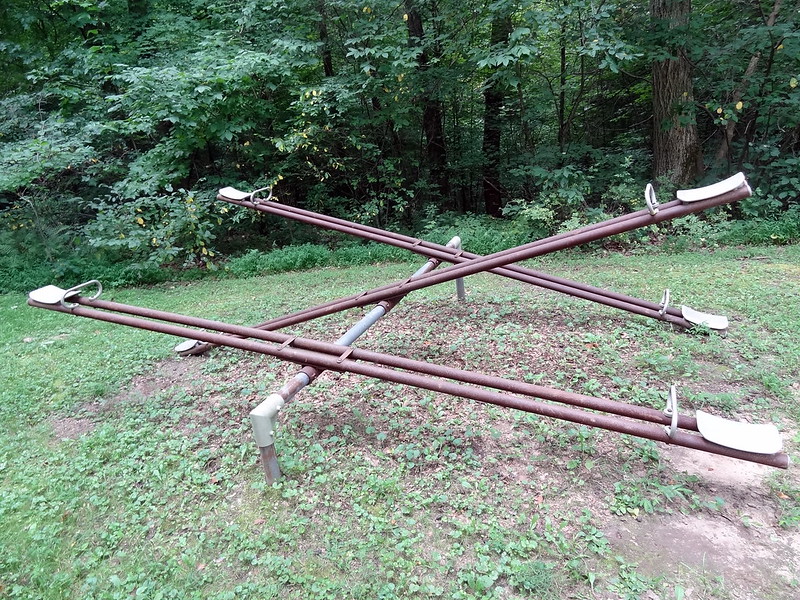 Last night I was rubbing one child’s back while I read The Mysterious Benedict Society aloud to both kids. His muscles were tighter than I expected in a 9-year-old, and my thumb jittered off one particularly knotty spot and settled with a shudder into a softer space. “Sorry,” I interrupted my reading, “that must have felt weird.”

He considered. “I kind of liked it. Can you do it again?”

I could not recreate the exact sensation for him, so I went back to reading and continued to rub his back.

After that moment, though, I wasn’t concentrating on the read-aloud as much as I should have been. Instead, I found myself reliving summer moments on the teeter totter in my neighbor’s backyard. We were far too old for teeter totters: I didn’t even move to South Carolina until the summer before 5th grade, and I’m fairly certain the teeter totter didn’t arrive until sometime after that summer. What sort of self-respecting 6th grader plays on a teeter totter? And why on earth did the neighbors have one in their backyard when the oldest of their three children was also at least 11? I can no longer answer these questions, but I know for sure that for at least part of one sticky hot Southern summer, the neighborhood kids ate watermelon and rode on a teeter totter in the Pinckney’s back yard.

I really was far too old for this and, as the oldest in the group, too big, too heavy, too cool. And yet, I couldn’t resist. Rion was big enough to balance against me – or we could put together some combination of the littler kids with the bigger ones to balance things out. Up and down we rode, day after day, laughing, dripping watermelon juice and gleefully spitting out the seeds.

If I close my eyes, I can still remember being the one down on the ground, looking at Rion on the other end of the board, trapped in the air… waiting… waiting… and then – now! – I push off hard and whoosh up to the top where I stop with a hard bounce against the board. Now I am suspended, looking down at Rion, knowing she will push soon…but when? waiting… waiting… and then, whoosh back to the ground where the seat hits with a hard juddering thump. Sometimes we hold each other suspended for breathless seconds between each motion; sometimes we find a rhythm and go up and down up and down with unthinking regularity. One way or another, the fun of it is in the motion, the unpredictability, the sense that where we are is not where we will be, and that we will have to cooperate to keep it going.

Sometimes, in a tiff, one child would hold another high high high in the sky and then, all anger and meanness, hop off the bottom altogether so that the other person would come down fast with a jolting, horrible whomp. Fights ensued. Teeter totter might be soothing in its regularity or wonderfully unpredictable, but abandoning someone to fall on their own was the unforgivable end of the game.

“That HURT!” we raged, eyes nearly streaming with tears because it did, in fact hurt, or it could have hurt or it might hurt next time, or maybe just because the game was over for at least a few minutes and everyone had to content themselves with the dullness of predictable gravity.

My memories were interrupted when the chapter I was reading ended; it was time for bed. Up and down, up and down. We had had a good day, I knew, though some parts were noticeably less good. This whole time has been like that, really.  Up and down: now I can make a list of the good bits – waking later in the mornings, snuggling longer with my children, working out most days – and the bad ones – missing my friends, not seeing my students regularly, feeling like a failure for some part of most days. I give my son’s back one more rub, wondering if I can rediscover the teeter totter, remember the joy in  the waiting, the whoosh and the whomp that are all part of the ride. Use my memories to make my present more bearable. Maybe. Maybe. But not tonight. Tonight it’s time for sleep. I shoo the boys off the bed and head towards their rooms to tuck them in and sing some songs.

Follow Persistence and Pedagogy on WordPress.com
Join 1,389 other subscribers

for teachers by teachers