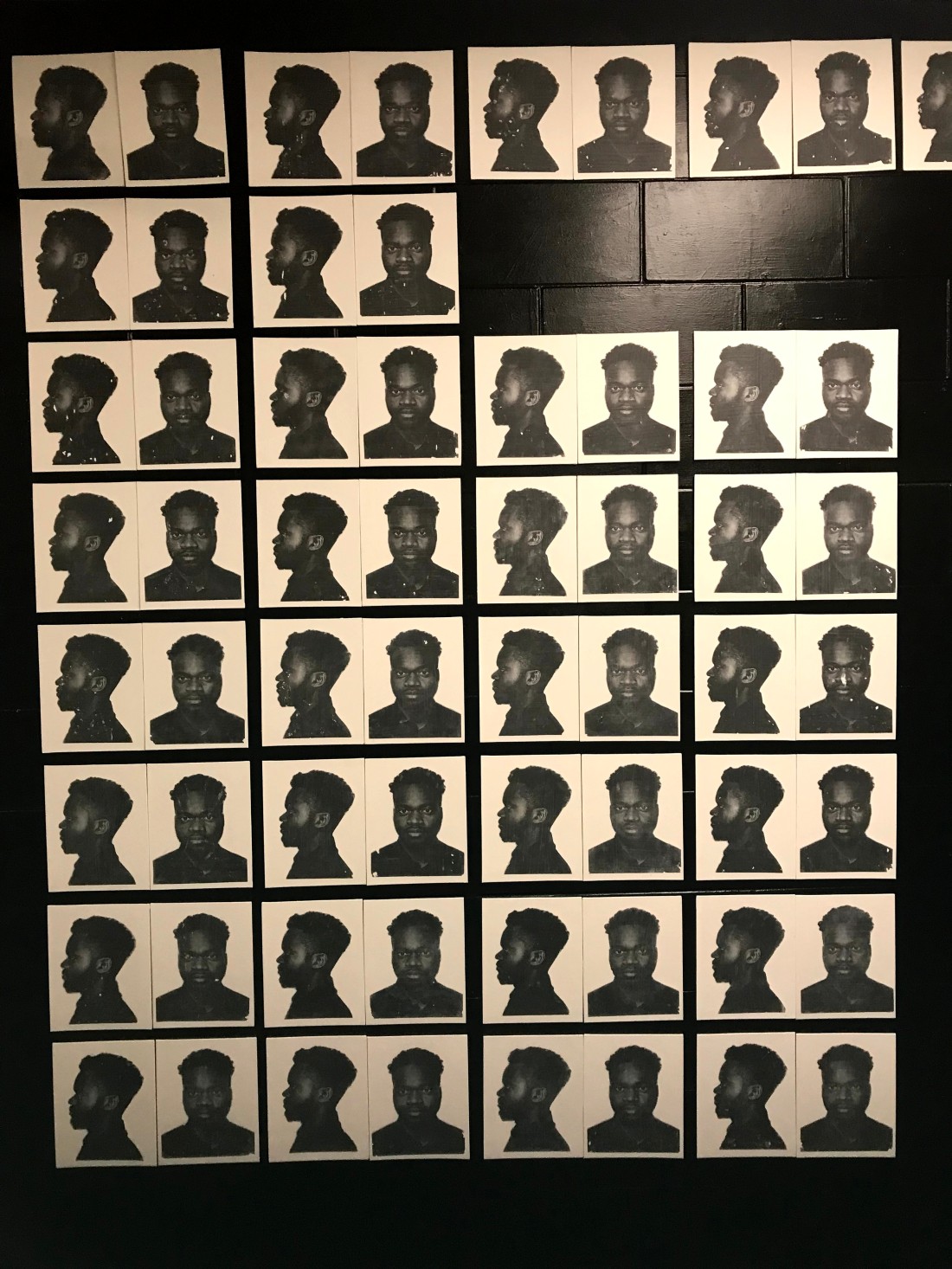 As I was walking towards the VP’s office today, I passed a student putting up a mural. I teach at an Arts magnet school, and every Spring sees another round of grade 12 students painting over wall space and creating a mural as part of their final Visual Arts project. It’s one of my favourite times of year, and I’ve been thinking about writing about it – I have loads of great pictures to share. But when I walked by Mankaasha Umba quietly hanging one gel print after another, mug shot after mug shot, my breath stopped in my chest.

Mankaasha was carefully displaying her critique of our racism in the hallway right by the VP’s office.

I don’t know her at all, but I stopped to say thanks. “This is just what we need. Can you tell me about it?” Oh yes, she could. These are pictures of her brother, a fourth year university student who plans to continue school and work in cancer research. This is not how she sees her brother, but it is how too many others perceive him.

She and I chatted for probably 10 minutes. We talked about racism in the school and in the world. We talked about perception: how when I talk about racism, I am “passionate” but if she brings it up she is “angry;” how her brother had been followed home by police officers who were “just making sure” he wasn’t loitering; how even in this day and age, she’s had English teachers in our school teach books with the “n-word” but  not even bother to discuss it. We talked about how she struggles more with the subtle racism of the every day than the overt racism of the special occasion. She said, “Go ahead and call me any name you want, I can handle that. But I don’t know how to fight what people never even say.”

She talked about how frustrated she gets because White teachers don’t want to talk about race for fear of making mistakes. She said, “other people have a voice, too. I don’t need to be the one calling this out all the time.” I admitted to being scared sometimes – even in our conversation – that I will say the wrong thing, but I’ve decided that the discussion is too important to avoid. She talked about how Black people have no choice but to talk about it whereas White people get to decide whether or not to engage. We talked about #BlackLivesMatter and #IfTheyGunnedMeDown and Jason Reynolds and Miles Morales and so much more. Finally I asked her if I could write about this and she said yes.

I think Mankaasha has just changed our school. I am so damn impressed I can hardly stand it. These kids, they are going to change the world. It gives me shivers to think about it. Mankaasha, thanks for starting the conversation.

I'm a high school English and Special Education teacher in Ottawa, Ontario. I'm also a reader, a writer, a partner and a mother of two. I use this space to think and write about teaching and living. View all posts by Amanda Potts

16 thoughts on “Let’s talk about race”